We find evidence for a "common-spectrum process" in the second data release (DR2) of the Parkes Pulsar Timing Array (PPTA). The process manifests as a slow drift of pulse arrival times from millisecond pulsars, with the same distribution of delays and advances across pulsars. The stochastic gravitational-wave background is expected to produce the same observational feature along with very specific spatial correlations, which current data sets does not allow to resolve. We find that the discovered process can not be explained by systematic errors in the position of the Solar System barycentre and by pure monopolar and dipolar correlations. However, we propose that the evidence for a common process can be caused by the rejection of the null hypothesis rather than by the presence of the signal with the same spectrum in all individual-pulsar data sets. We demonstrate two simulations that mimick the common red process.

The article is published in the Astrophysical Journal Letters.

A possible precursor for the detection of nanohertz gravitational waves or unmodeled pulsar noise? 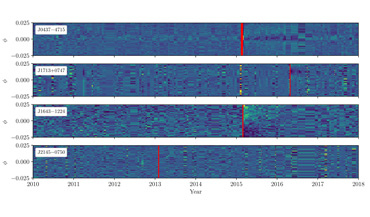